In choosing an automatic filter distributor, it is always important to ensure that the distributor you choose has experience and an extensive inventory of various types of automatic filters. As is the case with any other type of supplies for your business, it is also important to shop around to ensure that you obtain the best prices possible. Keep in mind; however, that going with the lowest price distributor may not necessarily be the best option. Cost effectiveness is important but not at the sake of quality.

Once you have found an automatic filter distributor, it is important that you become well acquainted with them. By taking the time to establish a professional working relationship with your filter distributor, you can ensure that when your company is in need of filters, you will have what you need.

Begin by clarifying the precise types of filters that you need and the industry for which you need them. You may also find it helpful to provide information regarding the frequency in which you will need a supply of filters.

Automatic filters are critical for keeping your equipment working at peak efficiency. By working with a professional automatic filter distributor, you can reduce downtime and boost productivity.

The powder induction mixer in Canada has evolved significantly over the years. In the past, the process industry was frequently subjected to long production times and high processing costs. This was typically due to an inability to effectively mix liquid batches with solids. Eventually, powder induction equipment was combined with a pump and mixer system that sped up the process, but there were still problems. The most common problem was the tendency for clogging. At the same time, maintenance costs were prohibitively high and it was necessary for operators to hold down feed rates in order to prevent clogging.

Today, the powder induction mixer in Canada has been able to overcome many of these challenges by making it possible to combine liquids and powders at the same time. Now, the eductor and pump have been eliminated completely. Powders can now be injected directly into special mixers, which allow the powder to be dispersed instantly into the liquid stream. As a result, the powder induction mixer in Canada has made it possible to reduce mixing cycles by as much as 50%. If you are interested in lowering maintenance costs and boosting production times, the power induction mixer could be a great choice.

The right automatic filter can help to ensure that your equipment is protected from damage while ensuring maximum production with less downtime. By choosing a professional automatic filter distributor, your business will be better positioned for meeting production goals.

There can often be many reasons associated with mixer failure. One of the most common reasons is shaft runout in which there is an excessive wobble to the shaft or even a slightly bent or bowed mixer shaft. In some instances, an improper mechanical seal can result in the malfunction of a mixer. In the instance that the bearing has begun to squeal, it may be necessary for the bearing to be replaced. Oil leaking, which is often the result of a faulty oil seal, can also result in a malfunctioning mixer. Finally, an unbalanced mixer shaft may also be at fault.

Regardless of what the reason may be, when choosing a mixer service repair in Quebec, it is important to ensure that the service is familiar with the various potential causes for malfunction and has the experience necessary to correct the problem quickly and accurately. 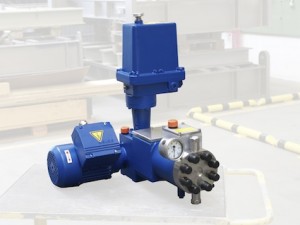 Bran & Luebbe offers an extensive line of different types of metering pumps, process systems, process pumps, and chemical injection systems. One of the many brands included in the SPX Flow Technology branch, Bran & Luebbe meter pumps are used in industries around the world, including biopharmaceutical, marine, chemical, and air and gas filtration and dehydration.

Speak to one of our sales representatives today